Cammers tell us about their startup costs, hours, and how much they make getting naked for strangers. 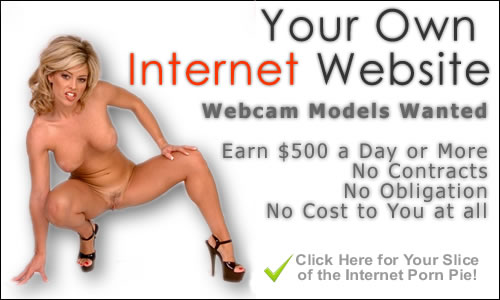 For awhile I considered it. Five hundred dollars [$372 USD] was about double what I had in my bank account at the time. Plus there was something kind of hot about the idea of people paying to watch me jerk off. At that age, I was caught somewhere between the indie rock and emo aesthetic, svelte with long hair. The look meant the creeps holding out in the dying days of Myspace would message my profile with lewd requests or suggestive flirtations. Why not try and turn that attention into money? What better way to make a quick buck?

While I ultimately decided against it, there have been a handful of friends/peers who have gotten into camming and other sex work over the years. The economics of the jobs always intrigued me. Was it really possible to make $500 [$372 USD] a day? What about overhead? Startup costs? Are the hours good?

Recently while contemplating a hard pivot from freelance journalism I asked some cam models about the costs/benefits. You can read their answers below.

Cecilia Renee Morrell, women’s rights activist and model
I originally started my career in this industry as a nude/boudoir/lingerie model. It wasn’t until someone told me about camming that I knew what it was. I felt that because it was so similar to what I’ve already been doing in my modeling work… it just made sense. Work from home, channel my exhibitionism, connect and chat with hundreds of people from all over the world. It enticed me immediately.

I did my homework before I dove in. I spent a couple nights watching other cam girls and reading cam-model info forums. Within this community we all tend to share resources. I found out what type of camera I would need for the best quality streaming, what were the best toys to invest in for shows, and how to set up my tip and goals. I started on My Free Cams. The site has no up-front fee, but all cam sites do take a percentage of the models earnings. I submitted my ID for age verification and started days later.

On average, there is not a ton of additional maintenance expenses that come with camming. I don’t find the need to spend hundreds of dollars on studio-grade lighting for my shows. My microphone cost me about $20. The only thing I really invested in was my laptop and webcam. Together that was under $1,000. If you put the time into looking like a million dollars, and feel like a million dollars; that’s what people pay attention to.

Most months I make anywhere from $1,500-$2,000 from camming. When I was online more regularly I could expect anywhere upward of $3,000, with the most I’ve ever made in a month being around $6,000. I feel like it is important to mention that your income bracket can be very fluid. There have been nights where I logged on and made next to nothing, whereas other nights I logged off with hundreds.

Camming can be quite a beneficial and stable career once you get the hang of your schedule, marketing strategy, and business plan. Figure out what works for you and what doesn’t. There are lots of folks who are rather quick to say it’s not a realistic career choice. I strongly disagree. You just have to remain focused and have a strong work ethic. It’s really easy in the vanilla world to follow a structure that your boss/superior may provide you, but it can be quite challenging being in charge of your own business decisions right out of the gate. It takes time to learn how to be the most productive and successful you. Once you get the hang of it, it’s all smooth sailing… this line of work may not be everyone’s cup of tea but it certainly is mine.

Daniel James, performer
I remember lurking the male cams, and all some of these dudes do is sit there, grainy quality webcam facing their junk, not showing their face with a flaccid dick in hand doing absolutely nothing. I thought to myself… I could actually put on a fun show with better lighting, props, and actually make conversation with the viewers. That’s the whole point of webcamming; to pull viewers into this online fantasy world for short-term entertainment. That’s when I decided to give it a shot.
I originally started with the website CAM4. They reached out and asked if I would be interested in broadcasting on their site shortly after I met their reps at a photoshoot. The male oriented section of the site caters to guys who like to watch guys and not just guys who like to watch girls as most of the other cam sites operate.

I feel like there isn’t much of an upstart cost for the guys to be honest. Female cam models obviously have to constantly dump more cash into their broadcasts because of expensive things like lingerie, make-up, and hair. All I really started with were two photography softbox lights I bought off Amazon for less than $100. Shortly after, I upgraded to a better webcam for around $50. I already had a collection of various underwear styles available, so I didn’t need to buy anything extra as far as clothing goes. There really aren’t any “fees” you pay to the cam websites. You keep all of the tips you earn. The viewers who tip you pay with tokens. Processing fees associated with the website are built into the tokens.

Growing an audience of dedicated fans doing this is inevitable. There’s a model for everyone in the camming world, and once a viewer finds their ideal cam model they won’t stop following. They get obsessive sometimes. It’s cool to see the same people join the room every week and engage in conversation with you. They always ask how you’re doing, what’s currently happening in your life, or want to know what your personal interests are. It’s a nice feeling. Dedicated viewers definitely spend more than random lurkers who are just cruising through cam rooms. A fan is less hesitant to spend more because you have already built a rapport with them so they feel connected like you’re a real life friend of theirs.

I’m just trying to explore as many different money making avenues as I can right now. I’m young and don’t have a lot of responsibilities. I always save a portion of what I make. My main goal is to get a career in corporate law one day.

Clara Joy, Stripchat
I had tried other jobs before this but really I just wanted to have my own money. Five years ago, a friend recommended me the studio that I still work for. I didn’t know much about this kind of work, I had no idea what it meant to be a cam model, or how to act in front of a camera. But I knew I wanted to move to another city, be independent, and to make as much cash as fast as possible. The first site I started working for was LiveJasmin, which operates behind a paywall. It only took me a couple of minutes to realize what I was capable of. The only upfront cost was buying some outfits at the start. They were enough to help me become a top model from the first minute I got online. Maybe it’s also because my personality is different from most of the models I know.

The studio I work for provides the make up artists, the cameras, and all the things that the models need. All you have to do is to be beautiful, smart, and learn what every member needs and wants from you. Sometimes you need to think ahead and to know what he might want even if he doesn’t know it yet. Being a model is pretty damn difficult and not many can do it as I do! I feel like a psychologist almost every minute online. The members need me and my advice I give to them.

How much I make really depends on the period. It’s approximately $8,000 USD per month. The most I have made was something like $14,000. I don’t complain, of course, but where there is

room for more I am always the first to be there. I’ll knock on any door to go further and further.

I want to reach some ultimate level on my earnings! So bring it on. I am ready!

Wes Myers, model
At first camming was something that I just did here and there. It wasn’t until I got a job working for one of the cam sites head offices, that I realized what being a performer really meant. I always knew that I was different, and very sexual. Being introduced to this community really opened my eyes. It made me realize that I wasn’t alone and that their were people out there exactly like me. Once I stopped working at the head office of the cam company, I began to take camming more serious. For me, it’s not about the money; it’s about the people and the community that comes with it.

It really doesn’t take much to start. All you need is a laptop, a decent internet connection, and a good quality webcam. I was originally camming on CAM4, but I have recently switched over to cam more on Chaturbate. It doesn’t cost anything to sign up and is a hundred percent free! One of the biggest expenses would probably be toys. You want to keep your shows interactive and different, so you need to have stuff to play around with. Toys are not cheap. Some performers buy different backdrops, green screens, and more. I like to keep it fresh by having different theme shows. Date night etc.

I don’t do it just for the money so I wouldn’t call myself a top performer when it came to making money. The most I have ever made in a month was $2,000 USD. I don’t log on as often as I would like. I do have a full time job Monday to Friday. I mostly cam on evenings and weekends.

The hardest part is starting out and building your following. It’s very rare that someone starting out will log on and make thousands of dollars during their first show. It takes time to build your brand. It’s difficult not to get discouraged at the beginning when it’s slow, but it will get better. Just interact with the people that are in your room, and make friends. Sometimes having less people in your room is better. In that small group of people you could find your big tipper! But again my favorite part is definitely the community and the viewers. Getting to see everyone at the different expos and conventions is also amazing. The love and support from the different cam models is truly inspiring. I love that I can say i’m part of this.